The Republican Budget Does Not Balance

The Republican budget sacrifices investments in childcare, education, nutrition, health care, infrastructure, and scientific innovation in an effort to claim their budget balances in ten years. But even after using accounting gimmicks, their budget does not balance so long as they claim to repeal of the Affordable Care Act.

Absurdly Low Funding Levels Set America Up for Another Government Shutdown — Last year's GOP budget reduced non-defense funding below the deliberately inadequate "post-sequester" caps under the Budget Control Act of 2011 in order to beef up defense. The House Appropriations Committee Chairman called those 2014 caps "unrealistic and ill-conceived," and the government later shut down because Congress could not pass funding bills that would expose in detail the harm that would occur at these funding levels. Despite that experience, the Republican budget this year again cuts non-defense discretionary funding for 2016 through 2024 by $791 billion below the post-sequester funding caps, and by $1.3 trillion – 24 percent – below the amounts needed to maintain this year's level of services over that period. This budget sets America up for another government shutdown in 2016 and perhaps beyond. 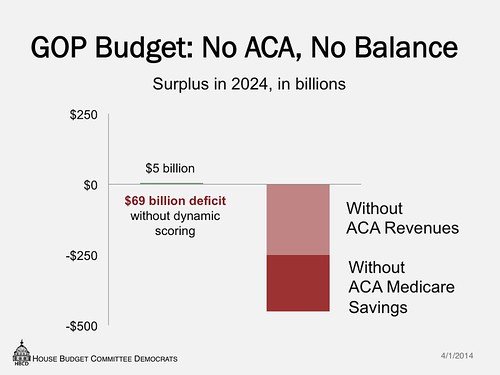 HR 2575 is the Smoking Gun – Not a single Republican in the House voted against this bill to add nearly $75 billion to our deficit by exempting the nation's largest businesses from their responsibility to provide health insurance to their employees. Because the Republican budget assumes all of the revenue from the Affordable Care Act, this bill leads to a $9 billion revenue shortfall in 2024 alone, wiping out the Republicans' supposed $5 billion surplus that year. This bill demonstrates that this budget cannot have it both ways. It cannot reach balance AND repeal even this single piece of the Affordable Care Act.